Gold To Shine In The New Year: Expected To Touch The 45000 Mark!

Gold—which is always an expensive but great option for investment, is set to touch the highest price mark in the new year, due to changing government policies, economic & geopolitical fluctuations, soaring stocks and the volatility of Indian currency. According to Economics Times & PTI, market experts predict a steep rise in gold prices, expecting them to touch the benchmark at Rs. 45,000 per 10 grams. Needless to say, the year 2020 is an excellent period for customers to exchange gold for cash with reputed gold buyers in Delhi NCR thus, earning profits on their initial in gold.

Why The Unexpected Rise In Gold Prices Worldwide? 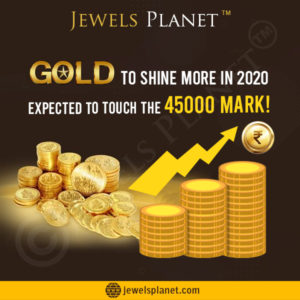 Fourteen central banks, including the Reserve Bank of India, have purchased a lot of gold since last year. Following a gap of nine years, the RBI had bought 8 tonnes of gold, presently holding around 566 tonnes in the depository. The recent global developments indicate that it’s a safe time to exchange gold for cash.

Considering the geopolitical conditions in 2020, financial experts believe that low interest rates globally have resulted in higher stock prices and extreme valuation levels, which is why, gold seems like a safe asset now, as per what Mr. Gnanasekar Thiagarajan (Director at Commtrendz) stated in an interview with PTI.

It’s not just one factor behind the escalating gold prices. Unexpected inflation, increasing crude oil prices, the ongoing trade war in the Middle East, and global economic slowdown have collectively given banks solid reasons to increase their investments in gold, thus, strengthening its prices in local markets.

Seeing the conditions in the Indian market, the total demand for gold is estimated to be around 700-750 tonne this year. The mid-term gold prices would fluctuate between Rs. 41,000 and Rs. 42,000 per 10 grams, which will go up to Rs. 44,000 to Rs. 45,000 by the year-end, in case there are newer global developments. An increase in customs duty by 2.5% and the depreciating value of Indian Rupee has made gold costlier in the domestic market.

According to Mr. Anantha Padmanaban, Chairman, GJC (All India Gem & Jewellery Domestic Council), 2019 was a mixed year for customers. The prices of gold dwindled in the first half but went up since July. A lot of people preferred to invest in coins, bars & bullions instead of jewellery (due to the additional burden of GST, labour charges & custom duty) on it. Now, several customers, taking advantage of this situation, are turning to sell their assets to gold buyers.

Through this week, following a sudden two-day tip, silver and gold prices collectively rose to Rs. 41,300 per 10 gram this Wednesday, amidst the signing of a trade deal between the US and China. The uncertainty surrounding the tariff on Chinese goods in America prior to this deal helped intensify the safe-haven appeal of the precious metal.

Mr. Prithviraj Kothari, the National President at India Bullion and Jewellers Association, predicts that gold prices will continue to rise in the next two-three years as well. Customers who need quick cash, or don’t have any further use for their gold and silver possessions, can sell them off. It’s a good time to exchange gold for cash with reputed gold buyers in Delhi/NCR, because clients will surely be making a profit on gold transactions, due to the rising prices this year.